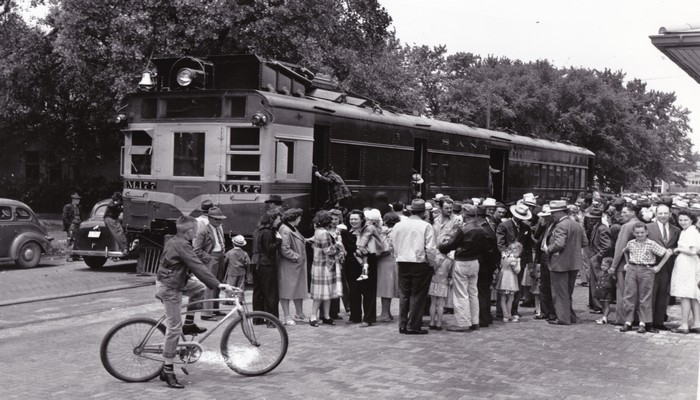 The Atchison, Topeka & Santa Fe Motorcar M.177 was jointly constructed by the General Motors Electro-Motive Division and the Pullman Car and Manufacturing Company, in Chicago, Illinois, in September 1929.

Motorcars, nicknamed "Doodlebugs," combined three functions of railroading into one vehicle: motive power, passenger seating, and baggage compartment. This functional consolidation efficiently served branch lines by saving the railroads the costly operation of an entire train with locomotive and half-filled cars. The baggage compartment of the M.177 served not only as baggage and freight compartment, but also as a Railway Post Office and as a refrigerator car (by sitting perishables on metal plates with ice blocks). "Doodlebugs," like the M.177, were the life blood along the smaller veins of the Santa Fe system serving small, rural communities in Oklahoma, Kansas, and Texas from the Depression through the Korean War.

Although the M.177 did not operate in Southern California, one of the cars from the same order, the M.181, did work Santa Fe's Los Angeles-San Bernardino run for many years. The M.177 last operated on a line between Pampa, Texas, and Clinton, Oklahoma, in October 1953, when retired to Topeka, Kansas, where it remained until its donation to the Travel Town Museum in 1958. Mechanically, M.177 is a unique survivor in that it retained its original Winton gasoline engine, while other motorcars were converted to diesel.