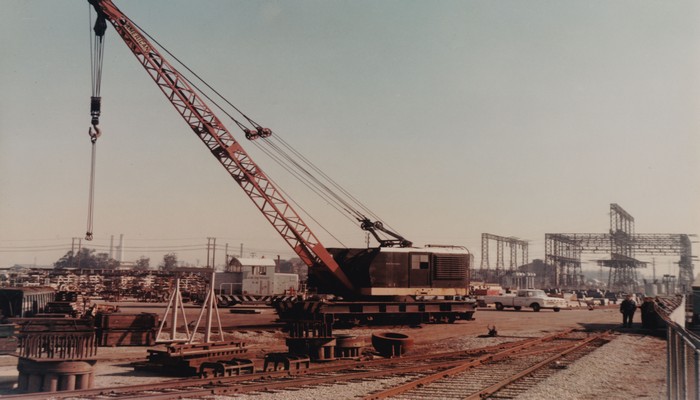 This newest railroad equipment at Travel Town was built for the United States War Department by the American Hoist and Derrick Company and delivered at Madison, Indiana, in 1943. It is a Model 508CD and has a nominal lifting capacity of 40 tons. It is mechanical driven and self-propelled, with a direct-drive diesel engine powering both the hoist and locomotion. The "CD" stands for Caterpillar Diesel, the manufacturer of the original engine (later replaced). Crane #1887 was assigned to the U.S. Navy as USN #84-00503. Most of crane's working career is unknown, but by the mid-1960s it had found its way to the Douglas Aircraft (later Boeing) plant in Torrance, California, working alongside two other pieces of ex-Navy railroad equipment - an EMC Model 40 Diesel Switching Locomotive USN #65-00323 and a 40' flatcar USN #61-02001. In a "kismet" for railroad preservation, all THREE of these historic Navy railroad pieces are now preserved at Travel Town - having been donated over the years by McDonnell-Douglas and its aircraft-manufacturing successor the Boeing Corporation.

This historic crane represents an important theme of railroad history and technology - "getting the job done." When major sections of track needed to be rebuilt or other trains derailed, a crane was called in to do the work. At Travel Town, Crane #1887 serves as both an interpretive artifact and an operational tool, along with flat car donated with the crane.