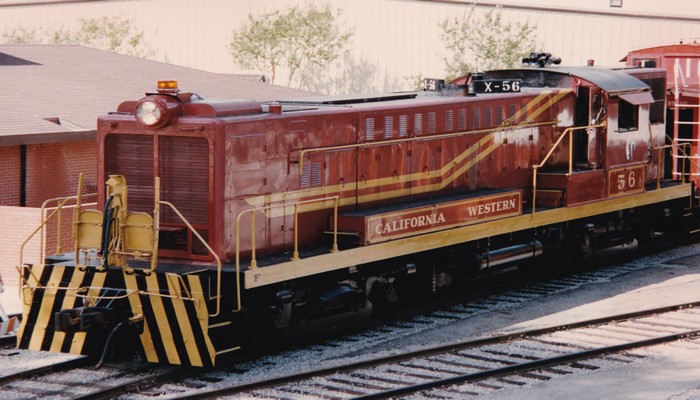 This model RS-12 diesel-electric road switcher and a sister locomotive were built by the Baldwin-Lima-Hamilton Corporation in April 1955, for the McCloud River Railroad in Northern California, and were originally numbered 32 and 33. The locomotives were designed for multiple-unit operation and equipped with dynamic braking equipment to assist in train handling on this mountainous logging railroad.

In June, 1969, both locomotives were sold to the Chrome Crankshaft Company and subsequently resold in September 1970 to the California Western Railroad (CWR), in Fort Bragg on the California Coast and renumbered 55 and 56. Both saw passenger and freight service on the CWR. In time, No. 55 became inoperable and was cannibalized for parts to keep No. 56 running. By 1992, No. 56 had been relegated to yard switching service.

CWR No. 56 along with many spare parts, came to the Travel Town Collection for preservation and operation in Travel Town's own proposed railroad through Griffith Park to the Los Angeles Zoo, known as the Crystal Springs & Cahuenga Valley Railroad.