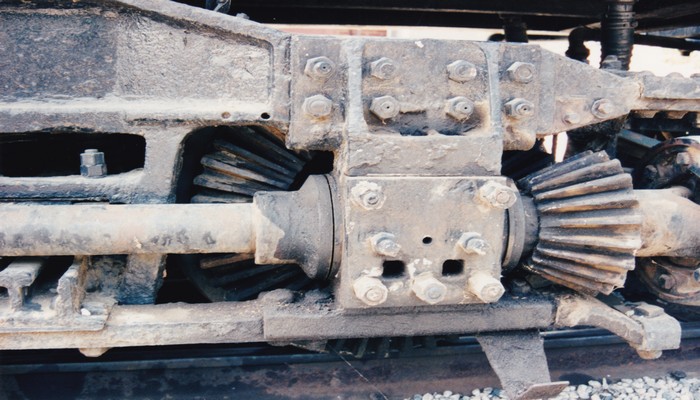 One lumberman’s answer to the difficulties presented by winding, hilly, and rough lumber railroads was to invent his own locomotive with a geared transmission. Manufacture of Ephram Shay’s locomotive, called a Shay after him, began in 1880. Like the other two types of geared locomotives, the Heisler (see our Pickering Lumber #2) and the Climax, the Shay was designed for flexibility and power on grades and curves. It was not a fast locomotive, but it could haul 167 tons up an impressive 6% grade. Compare this with the 1% standard grade requirements on mainline railroads.

Construction of the Placerville & Lake Tahoe Railroad began in 1903 along the route originally suggested by Theodore Judah for the first Transcontinental Railroad. When it was finished in 1904, the El Dorado Lumber Company took possession. The 8.05 mile standard gauge railroad north of Sacramento brought milled lumber from Camino to Placerville, the Southern Pacific mainline connection. In 1911, it became known as the Camino, Placerville & Lake Tahoe Railroad. Meanwhile, the American River Land and Timber Company built a sawmill in the forest north of Camino; to transport lumber they also built a narrow gauge railroad and an astonishing 2700-feet-long cable tramway 1100 feet over the American River in order to reach Camino. In 1917, Michigan-California Lumber Company absorbed that operation, along with the CP<.

This Shay was purchased by the Little River Redwood Company in Crannell, California, as #4, and in 1936, was sold to Michigan-California to help on the CP<. Although the line was never extended, it still has the rights to continue on to Lake Tahoe, along Judah’s favored route.