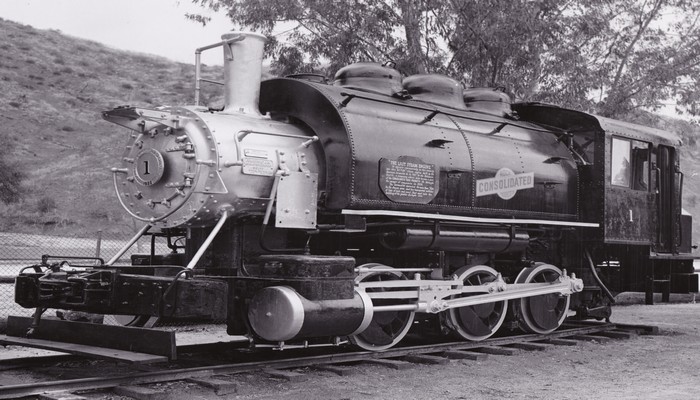 This industrial-use locomotive from Conrock exhibits another of the many options offered by locomotive builders to meet certain precise needs. Most locomotives pulled tenders, large trailing cars which carried a supply of water and fuel for the boiler. The locomotives used in industrial plants to haul equipment, gravel, or fuel, around the property didn't need large tenders because they were never far from water and fuel supplies. In fact, a tender just added unnecessary length to the locomotive, making maneuvers difficult in tight industrial yards. This locomotive is equipped with a "saddle tank" arched right over the boiler to carry some additional water. This configuration made this locomotive more appropriate to its use of hauling cars full of gravel a few miles from quarry to crusher. The weight of the water in the tank also helped the locomotives pull heavy loads without spinning their wheels. After thirty years of work, this locomotive was retired in 1955 at the order of the Smog Control Board and replaced by a diesel engine.