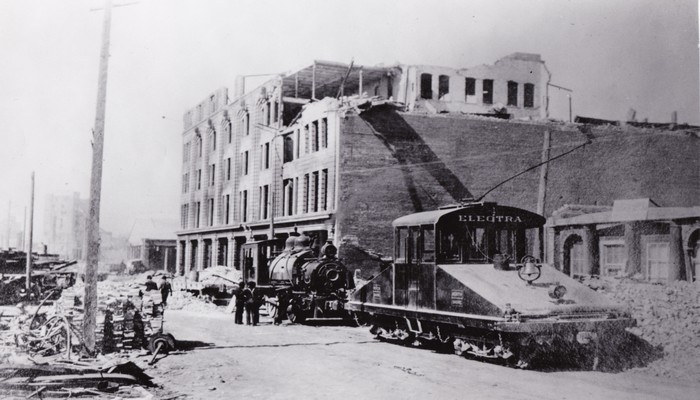 Incorporated in late 1871, the narrow gauge North Pacific Coast Railroad provided transportation between Marin County and a San Francisco ferry landing. The property attracted the interest of investors of the Pacific Gas & Electric Company, who considered an electrified NPC an ideal customer for their electric power. They purchased the road and reorganized it as the North Shore Railroad (NSR) in 1902.

This one-of-a-kind, electric locomotive, called the "Electra", was built that very year in a progressive step toward an electrified, standard gauge railroad. "Electra" was built in NSR's Tiburon shops on the north shore of the San Francisco Bay. Its unique sloped ends were fabricated from steam locomotive tenders, wedged on either side of the cab, and filled with water on one end and sand for ballast on the other. It was not a complete success for the North Shore Railroad. For that time, it drew such large amounts of electricity that other electric cars along the line would slow to a crawl, and, for this reason, was operated only during the early hours of the morning. In 1906, the "Electra" was shipped across the Bay to help San Franciscans clear rubble after the earthquake, and later the Central Pacific purchased it, and renumbered it #201, but may have merely stored it until 1917, when the locomotive was purchased by Pacific Electric. Pacific Electric put the "Electra" to work at various construction projects and switching duties in Los Angeles until its retirement.

In 1925, the "Electra" labored on the construction of the subway system in Los Angeles; specifically the subway tunnel which ran underground from Glendale and Beverly Boulevards to Fifth and Hill Streets, which is stripped of all its equipment, but is still in existence today. The "Electra" performed its last duty as a switch engine at P.E.'s vast Torrance repair shops, south of Los Angeles, until its retirement in 1952.