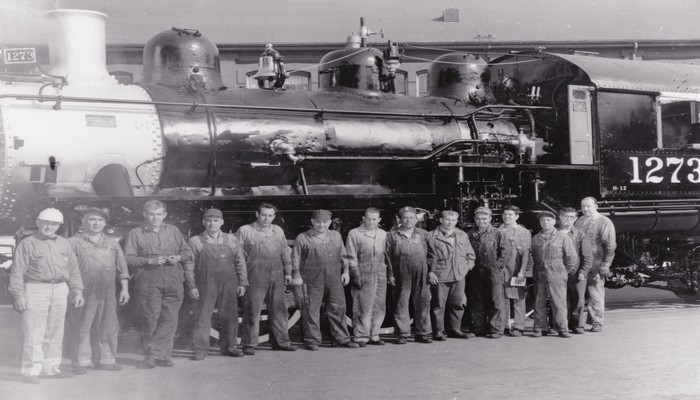 Most locomotives in the United States were not built by the railroads themselves. But over the decades, some of the major railroads developed repair shops and foundries so complete and capable that they began to design and build their own locomotives. This particular locomotive was built by the Southern Pacific, for the Southern Pacific, in their Sacramento shops in 1921. Used primarily as a switch engine in the yards, #1273 nevertheless logged 1,500,000 miles during it's 35 years of service.

Locomotives, like automobiles, had controls uniformly positioned in the cab. The throttle, reverse lever, brakes, and other controls for operating the locomotive were always on the right side of the cab, called the engineer's side. The fireman's place, therefore, was on the left side of the cab, from which he would stoke the boiler's firebox with wood, or in later years, coal or oil, so that the fire in the boiler would keep the steam at the temperature and pressure required by the engineer. After the turn of the century, more and more western locomotives were built to burn oil as fuel, and the job of the fireman changed from frantically shovelling to watching gauges and using valves to control the fire in the boiler. Throughout the history of railroading, and even today, the most important, exciting, and romantic job on the railroad is the job of the engineer. Although the conductor was boss on the train, the engineer was the one who controlled the raw power of the machine, and had the safety of the passengers and crew in his hands. To become an engineer usually required a high level of seniority, working one's way up from crewman to fireman and finally to engineer.