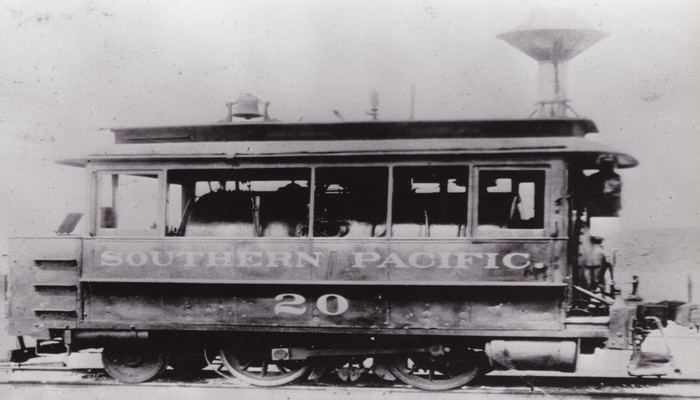 Originally numbered #2, this locomotive was a part of a four-locomotive order for the Market Street, Park and Cliff Railroad in San Francisco, California. The locomotives were team "dummies" disguised with a wooden shell to resemble a street car so as not to frighten the horses sharing the same street. MSP&C was never built, and the locomotives were placed in storage. In 1883, the four engines were assigned to the Park and Ocean Railroad, which became a part of the Market Street Railway ten years later. In 1900, CP #2, #3 and #4 were sold to the Southern Pacific and were renumbered 20, 21, and 22, respectively, and placed in service out of Colton, California, on the SCMR. In 1905, the steam dummies were sent to the Los Angeles shops for reconstruction to a 0-4-0 wheel arrangement.

Locomotive #20 was renumbered #5 and worked as a shop switcher. Beginning in 1919, it was renumbered several more times and eventually transferred in 1921 to the SP Bayshore Shops (San Francisco.) In 1939, it was located in storage, overhauled and painted "Cahuenga Valley Railroad,"although never having run on that line¾decorated for use in a gala pageant celebrating the grand opening of Los Angeles Union Station.