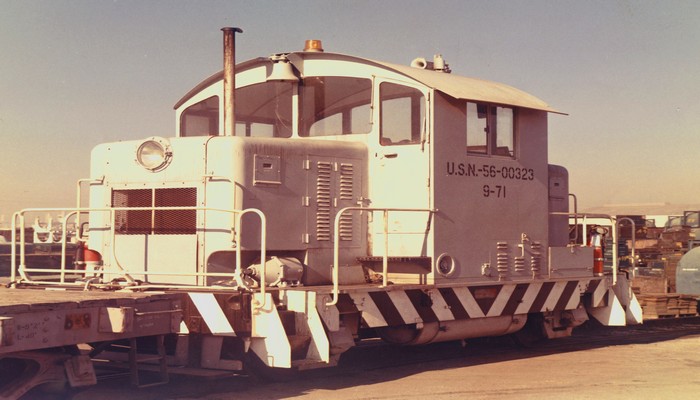 Travel Town #1, affectionately christened the "Charley Atkins," in memory of Travel Town's founder, is the first display locomotive at the museum to move under its own motive power since 1961. The #1 spent most of its working life as an industrial switcher. Built in 1942 for the United States Navy, "Charley" was one of only eleven Model 40 diesels ever built by the Electro-Motive Corporation, a division of General Motors based in La Gange, Illinois. This 300 h.p. prototype locomotive, designed for switching freight cars from track to track in railroad yards or hauling heavy loads around an industrial field, represents early experimentation in diesel design, just as steam locomotive manufacturers had tried so many different sizes, wheel arrangements, and weights. The design of this locomotive is unusual because its two Model 6-71 diesel-engines power a DC traction generator supplying power to a pair of four-wheeled trucks—most switching locomotives of this size would be equipped with two traction motors, one for each wheel set.

In his early days, "Charley" worked for the Navy hauling coal and supplies at the Torpedo Station on Goat Island, Rhode Island. Later, "Charley" served at the Naval Air Station, North Island in San Diego. After a long career with the Navy, it was transferred, in 1962, to the McDonnell-Douglas Aircraft Corporation for use at the Naval Weapons Industrial Reserve Plant and worked for more than twenty-five years at the McDonnell-Douglas plant right here in Torrance, California. On March 11, 1988, the Los Angeles City, Board of Recreation and Parks Commissioners accepted the McDonnell-Douglas donation of Travel Town #1. "Charley" embarked on a new career as a switch locomotive, here at the Travel Town Museum.