By the end of May 1999, the Department of Recreation and Parks had released 1.5 million Ladybird Beetles (ladybugs) in valley Village Park (in the San Fernando Valley) in an effort to prevent the pest from spreading. In other parks, several infested eucalyptus trees were selected for treatment with Merit, an effective pest control product. Additionally, the departments of Recreation and Parks, Public Works, and the Zoo each contributed $10,000 to Dr. Donald Dahlsten, an entomology professor at the University of California, Berkeley, to research biological control of the new pest using environmentally friendly methods. Dr. Dahlsten researched and imported specific parasitic wasps from Australia and released them in the infested areas of Los Angeles over a period of three years.

The efforts described above resulted in some benefits, but they were ultimately unsuccessful for many trees in our parks. In January 2002, additional funding provided by city officials allowed the Department of Recreation and Parks to hire a contractor to begin removing the dead trees. 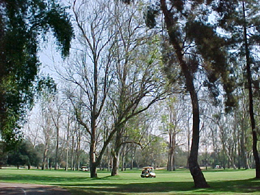 The trees were evaluated for the level of hazard they presented, which ultimately resulted in over 5,000 of the most hazardous trees being removed. Forestry staff observed that individual trees responded differently to the stress caused by the Psyllid infestation. In addition to defoliation, the most common symptoms were splitting and peeling of bark shortly before dying. However, some of these trees have had green leaves develop from normal buds and do not show stress factors. 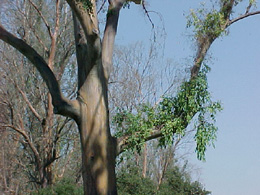 Other trees had chlorotic leaves, where the majority of the growth was epicormic, commonly known as "sucker growth." These trees were evaluated, and if additional structural defects were found, such as a history of failed branches, included bark, leaning trunks, V-crotches, the presence of decay in the root zone or trunk, or the tree was growing in an area visited frequently by the public, they were removed. An additional observation was made where the depletion of nutrients and failure of "recharging the storage" due to repetitious loss of leaves caused trees to respond by checking, which is the splitting of the main trunk's  interior. This problem has increased the overall potential for tree failure. 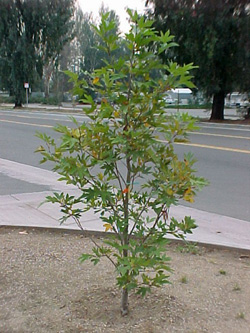 The removal of trees with limited resources to replant presented a significant challenge to both the Department (Recreation and Parks) and the public. Request to fund reforestation efforts is submitted in annual budget requests. Concurrently, the Department has evaluated all of its park sites for the opportunity to plant young trees. The existing tree species palette was analyzed and it was determined that many of the current tree species will not be replaced after they die, but rather another species will be introduced which has proven to be more successful or is better suited to the native plant palette of the watershed where that park is situated. A broader variety of species in the parks will increase the biodiversity and sustainability. Also, a loss due to an unknown plague such as with the eucalyptus trees, will be minimized.

Please call the Forestry Division at (213) 485-4826 to obtain more detailed information about the infestation, our Department's preventative measures, and reforestation program.