Both the biological community and the physical environment are continually interacting, creating a flow of energy and a natural 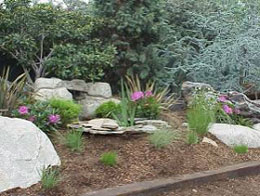 recycling of matter throughout the system. All life within the ecosystem depends on this continuous cycle. The staff of the City of Los Angeles Department of Recreation
and Parks Department applies this basic truth to the management of a healthy ecosystem on more than 15,000 acres of parkland. We also recycle 100% of tree trimmings and green waste.

Each year, about 10,000 tons (23,800 cubic yards) of tree trimmings from City parks are recycled at a facility at Griffith Park that the Department has operated since 1987. Some of the tree trimmings are shredded into 3" - 5" wood chips, which are then
used at the City's 385 parks as organic mulch.

Organic mulch is made up of shredded
tree and landscape trimmings, and leaf litter, a combination that is used to provide a protective soil cover under trees and shrubs, and in planters. Mulch enriches and protects soil, helping to provide a better growing environment for plants by retaining
moisture, maintaining even soil temperatures, preventing erosion, and controlling weeds.

Organic mulch is also decorative,
and it improves the condition of the soil. As mulch decomposes, which it does slowly, it releases organic matter that helps to keep the soil loose. This improves root growth, and increases the infiltration of water, and the water-holding capacity
of the soil. Organic mulch is a source of plant nutrients and provides an ideal environment for earthworms and other beneficial organisms.

When you walk into a woodland area, the ground underneath is soft with a bouncy feel. In a healthy ecosystem, nature tucks her plants under a blanket of mulch that protects the soil from being eroded.

Mulch is also used to moderate soil temperature by providing an insulating barrier between the soil and the air. This means that mulched soil stays cooler than soil that is not mulched. Mulching also:

While mulching is good, over mulching can cause problems. Piling wood chips or pyramids of mulch too high around the base of a tree can create a multitude of problems. Mulch that is too deep suffocates roots by stopping airflow, and in some cases, it
can cause soil compaction. Over-mulching blocks the penetration of water and fertilizers into the soil. Death from over-mulching is very gradual, starting with a decline in plant vigor and rate of growth. Leaves do not grow to a mature size and they
begin to show signs of decline in the late spring. Every year, these symptoms get worse, but recovery can occur if the mulch is removed from around the plants before the decline progresses too far.

Some species can also have new roots grow from the stems of the plant directly into the mulch, rather than have the root system further expand into the soil. This makes trees and shrubs more prone to damage caused by both droughts and freezes since the
roots are now more exposed. Many trees die because mulch piled around the stems encourages disease-causing organisms that thrive in the cool, moist environment of heavy mulch. Mice and other rodents can also nest in the mulch and will feed on the
bark.

Compost is created from a combination of tree trimmings, Los Angeles "Zoo Doo," and other bio-solids. This material is mixed in an aerated pile for 15 days at a temperature of 135°- 145°F.

When ready for use, compost helps soil and plants in numerous ways, including:

More than 3,500 tons of living material becomes compost at a facility located next to the Griffith Park recycling plant that has been operated since 1996 by the City's Department of Public Works, Bureau of Sanitation. This facility and the recycling plant
are the first of their kind in the United States. 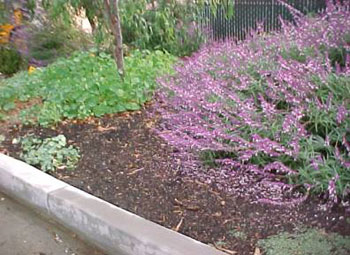 Compost is donated to non-profit organizations and schools in the Los Angeles Unified School District; it is also used in the garden areas at the Los Angeles Zoo and in park landscaping projects throughout the City.