Please choose the correct one from the list below.

One hundred years ago, in 1904, the City of Los Angeles was the first in the nation to recognize the importance of providing recreation programs and services by forming a dedicated city department just for this task. Named the "Playground Department," one of the innovations introduced by this progressive body was to allocate funds for a series of public swimming facilities. Swimming pools or baths had previously been the domain of exclusive clubs or private organizations such as the YMCA. As early as 1912, the Playground Department announced the completion of wading pools, no more than a foot deep, at the Echo Park, Violet Street and Slauson Playgrounds, at a cost of $2,147.

The acquisition of the Bethlehem Baths, originally operated by the Bethlehem Institutional Church, marked the official starting point for the municipal pool system familiar today. The City renamed the facility, which was located at Vignes and Ducommon Streets, as the Vignes Municipal Bathhouse and Natatorium, and after spending $1600 on refurbishment, the City opened the pool on January 22, 1914.

In 1916, the Playground Department experimented with creating safe and supervised swimming holes along the Arroyo Seco to the Los Angeles River, following the existing practices of Angelenos who were in the habit of cooling off in naturally forming pockets of water in the River and its feeder streams. Two artificial swimming holes, roughly 20 feet wide and 30 feet long each, were created, one pool for men and the other for women, as they were required to bathe in separate pools. Between the two pools were dressing rooms made out of tents with wood planks for floors. The total cost to the Playground Department came to $200 for canvas and lumber, however a winter storm swept everything down river just a few months after the swimming holes were built, and that was the end of supervised swimming holes. 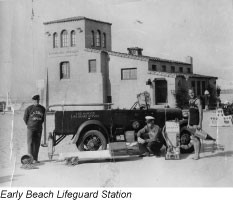 By 1921, the City operated four municipal pools plus two pools in campgrounds. Attendance from the four was 141,904, and they produced over $5000 in revenue. A new division was formed, and in 1922, a Supervisor of Aquatics was appointed.

With the annexation of beach property in Venice and San Pedro in the early 1920s, the City undertook the challenge of open water lifeguarding. In the 1950s, the City supervised stretches of beach near Santa Monica and El Segundo in addition to City-owned Venice and San Pedro, and operated two Municipal Beach Bathhouses - the Sunset Pier Bathhouse and the Cabrillo Beach Bathhouse. In 1974, the County of Los Angeles began handling lifeguard services at all beaches except Cabrillo Inner Beach, which is Port of Los Angeles property.

By 1926, the City operated 11 pools, four of which were at camp sites, and Los Angeles was one of only two cities in the United States that had a separate swimming pool, beach, and bathhouse division. That year, the City's pools served 402,744 swimmers. 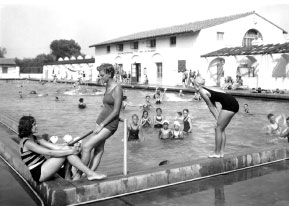 The Los Angeles Swim stadium was opened for the Los Angeles 1932 Olympics. The stadium was built for aquatic competition and its design has been copied in water stadiums in many other countries. The swim stadium building closed in 1994 after the Northridge Earthquake caused significant damage, but was rebuilt as part of the Exposition Park Intergenerational Community Center project and reopened in 2003.

Harvard Pool and 109th Street pool were built with the aid of the Federal Works Progress Administration (WPA) during the 1930s. WPA workers were also used for the Swim Stadium, Algin Sutton Pool (once known as Manchester Pool), and Stoner Pool, in addition to assisting with many other parks projects. 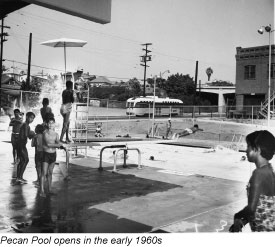 After World War II, there was a dynamic increase in the demand for recreational services. Local city and county agencies extended their services to meet all the expanding needs. A $12 million bond issue for recreation facilities in 1946, coupled with consolidation of the Playground Department and Park Department into the Department of Recreation and Parks, allowed for better planning and use of resources, followed by development of 53 new playgrounds and 10 new swimming pools. Cheviot Hills, South Park, Hollywood, Lou Costello, Lincoln Park, Van Nuys-Sherman Oaks, Verdugo Hills, West Wilshire (now Pan Pacific), Green Meadows (shallow) and Harbor Park Pool were built during this period. 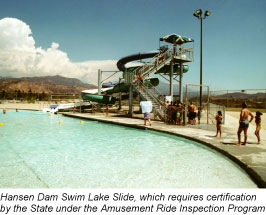 In 1957, 95% of voters expressed their continuing support for recreation facilities and pools with approval of a $39.5 million bond, at that time, the largest recreation and parks bond issue in the country. Over $5 million dollars of the bond money was spent on municipal pools and 15 new pools were built over the next 10 years. Sepulveda, Lanark, Mar Vista, Northridge, Van Ness, Richie Valens (formerly Paxton), Venice Pool, Rustic Canyon, Westchester, Pecan, Peck Park, Rancho Cienega, Sylmar, Woodland Hills, and Hubert Humphrey pools were built with this bond money.

The 1980s brought a decline in the use of municipal swimming pools as well a slowdown in the building of public pools. Some of this decline can be attributed to unfounded perceptions about disease transmission associated with swimming at public pools, as well as the increased building of backyard pools and installation of residential air conditioning. Only seven new pools have been built since 1979: E.G. Roberts indoor pool in 1979, Banning Pool built in conjunction with LAUSD, Echo Deep in 1982, Westwood indoor pool, 1988, and Cleveland Pool in 1995 in conjunction with LAUSD; Hansen Dam Swim Lake and Richard Alatorre Pool both opened in 1999.

Revenue from swimming pool operations has remained fairly steady over the last decade. In 1999, Mayor Richard Riordan instituted a program called Kid's Swim Free, under which youth (17 and under), and also seniors and persons with disabilities, were able to attend any pool for recreational swimming without charge. Where annual revenues had been about $600,000 prior to this program, the total dropped to $510,000 and an additional allocation of budget funds was provided to the Department to make up for lost revenue.

Rate increases for adults and for lessons and other pool uses were instituted in the 2003-2004 fiscal year, in response to continuing tightening of the overall budget of the City. The estimated revenue from all Aquatics activities in 2003-2004 was $920,000.

As with many recreation activities and park amenities, the City of Los Angeles has been a national leader in public aquatics for a century. The City is positioned to continue that progressiveness into the new century through innovation in pool design and perseverance in identifying funds for new and rebuilt pools.