Please choose the correct one from the list below.

Early in 2003, Mayor James K. Hahn convened a Blue Ribbon Infrastructure Task Force to look at the capacity and maintenance of the physical infrastructure of the City of Los Angeles, including the parks and recreational facilities. A key segment of the Recreation and Parks study offered insightful information on the conditions of the swimming pools.

The Task Force found that the majority of Recreation and Parks facilities of all types operate at or above capacity. Each type of Recreation facility has it own life cycle determining optimal repair and replacement timetable, and in addition a facility may, as time passes, require upgrades, renovations and/or replacement because of the changing needs of the community. Failure to keep up with optimal maintenance may shorten the life cycle of a facility, more so if the facility is used at maximum capacity. This is an especially enlightening issue with pools, where most have far exceded an expected life span, from both a basic repair perspective and from a community needs point of view. The longevity of the swimming pool system of the City is evidence of skilled maintenance and at least a minimal level of consistent annual funding.

The Infrastructure Report featured evaluations keyed to a letter grade - A, B, C, D, or F. Each of the pools was evaluated by a variety of professionals - 11; architects, maintenance and construction personnel, and aquatics managers. The grades given the pools offer an assessment of the state of the swimming pool system of the City, and represent a first step in understanding the current and further conditions so as to consider meeting future needs.

Grades for Pools were based on the following criteria: 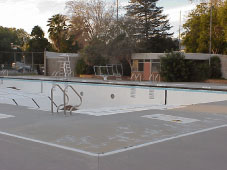 The 2003 Infrastructure Report cited fifteen pools graded F that have failed and need to be replaced. The majority are over 50 years old and eight of them are currently closed.

A cross-section sketch of a pool showing the common deficiencies and failure points is shown on the following page, Pool Repair and Replacement diagram.

Of the 15 pools graded D, six are deteriorating because of age and condition, and need to be replaced. The other nine D pools may be refurbished, but this would be a "band-aid" approach, extending the lifespan of the pool for only a short period of time (a major pool refurbishment may extend the lifespan for five to ten years and a minor refurbishment, an extra two to five years).

In addition to the need to replace and repair existing pools, there is a need for new pools. A 1999 Community Needs Assessment study commissioned by the Department of Recreation and Parks, which surveyed residents city-wide, rated Swimming Pools as the most desired recreation facilities in the City.