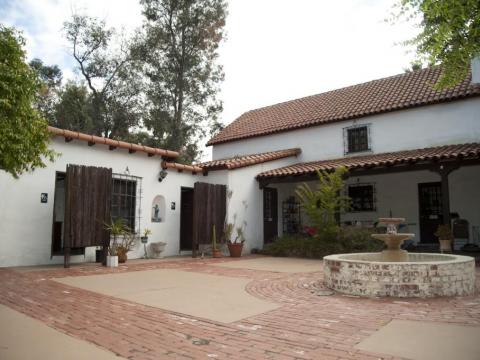 
Description: The Andres Pico Adobe is the second oldest Adobe home in the City of Los Angeles!

History: First were the Fernandenos, Shoshonean Indians, who were the original inhabitants. The Fernandenos were famed for their basket making, peaceful temperaments and ingenuity in utilizing the native plants. In later years they were converted by the padres and lived at the mission, from which there name is derived.

Spain, of course, claimed the Valley from 1769 on, when Portola discovered the area en route to the north. Spain established the mission chain and ceded land grants to the favored.

In 1822 Mexico secured her independence, and it was this government, which secularized the missions in 1834. No later than this date a one-room structure was built, now the sala (living room), with the Indians from the Mission doing most of the work. It is not known for what use it was built - a home?, for storage? It could have been part of the Mission complex. During the Mexican regime, wars were being waged between the north and south of California, against the Mexican government, and ultimately against the United States.

In 1845, Andres Pico and Juan Manso were granted a nine-year lease for the San Fernando Valley. Pico, at that time a 35-year old rancher, lived at the Pueblo of Los Angeles. He ran cattle on his Valley ranch and made the Mission his rancho home. His brother, Pio, was governor in 1845, and one year later it was Pio, that negotiated an agreement with Eulogio de Cells, a Spaniard, which has to be the best real estate transaction ever consummated! Mexico at that point needed money to finance the war against the United States, and Pio was authorized to borrow $14,000 from de Celis with the understanding that if the money were not repaid in eight months, de Celis would own the San Fernando Valley. And so it was! De Celis foreclosed, and all 116858 acres of the Valley were his, except Rancho Encino and Rancho El Excorpion, which had been previously given to Indians. In 1854, Andres paid de Celis $15,000 for an undivided one-half interest in the Valley (no-boundaries).

Sometime between 1846 and 1860, the diving room and present library were added to the Adobe, by whom we are not aware, perhaps by de Celis himself. Andres never lived in the Adobe, as far as history reveals, but rather chose to live in the long building at the Mission. He was a gregarious, social man who loved to entertain, and the Mission provided the space he needed.

In 1862 President Abraham Lincoln returned land to the Missions and the San Fernando Mission received 170 acres. The same year Andres sold his interest in the Valley to his brother Pio, who kept the land until 1869, when he sold the undivided one-half interest to the San Fernando Farm Homestead Association, whose leaders were Isaac Lanker shim and Isaac Van Nuys. They raised wheat, with success; so they turned to the dry farming of what on a large scale. The boundaries having been settled, they planted the whole south half of the Valley in wheat (except Encin0 and El Excorpion) containing seven large ranches. They were so successful that they were even shipping wheat to Liverpool, England. In 1874 Catarina and Romulo Pico, adopted children of Andres, married and moved into the Adobe. They modernized it by adding a kitchen and two wings and the second floor. A wooden floor was laid atop the Mission tile floor, and other "Yankee" improvements were made. Catarina and Romulo lived in the Adobe until the late 1800's and then was sold several times, rented and finally stood vacant. By 1925 it was in total dis-repair, vandalized and near total destruction.

Enter our 'hero', Dr Mark Harrington, curator of the Southwest Indian Museum and the famous archeologist! He and his wife had been searching for an adobe to restore and when they discovered the Andres Pico Adobe they knew that it was just what they had been seeking. Finally able to persuade the Lopez family who then owned it to sell the property, Dr. Harrington painstakingly and authentically began to restore the Adobe. It was he who discovered the old mission tiles under the rotted wood flooring and who, because of his experience and knowledge, was able to date the tiles to 1834 or before. The Adobe and the grounds became an oasis of beauty and color and peace, and the Harrington's enjoyed it until 1845 when again it was owned or rented by several families in subsequent years.

In 1957 the North Valley Y.M.C.A. purchased five acres including the Adobe, which was used for its offices, until 1965 when it was put up for sale. Enter our second 'hero' the San Fernando Valley Historical Society. Fearing this precious old landmark would be demolished, the Society tried unsuccessfully to raise money to purchase it. At the last moment, the City of Los Angeles purchased the property and saved the Adobe from destruction. The property is administered by the Department of Recreation and Parks who maintain the grounds and exterior of the buildings.

The Adobe itself is managed by the Society, which restored the interior and operates a multi-program to form an active life for the Adobe. The Adobe is unique - a "living museum" - since besides its regular open hours, it is used for many affairs: the Society's monthly meetings (open to all), weddings, receptions, breakfasts, dinners, picnics, etc. Two special affairs are "Rancho Days", depicting early California living by exhibit, demonstrations, food, etc., held on the third Sunday of September; and Las Posadas, the enactment of the Mexican Christmas procession on the Saturday before Christmas.

Restoration: The original house was a one-story building 45 feet long. The main foundation was of water worn boulders, the northwest wing foundation of boulders and mission tiles and the north wing of the mission tile only. Although the southwest wing is not as old as the main building it may have been build before the Pico restoration.

The objective of the Pico restoration had been to produce an up-to-date residence of the mode of 1873. The Harrington's proposed to restore the home in truce adobe style, crating as much early California atmosphere as possible. In doing so, they set the character of the Adobe back fifty years before the "Pico Restoration.

The Adobe walls were repaired with bricks made from soil on the property. The wooden joists, rafters, the wooden plated they rest on and the ridgepole were made extra heavy and all tied together securely. The original floors of the main room were large squares of Mexican paving tiles found buried about 10 inches below the wooden Pico floor. Other floors were found to be tile of a different vintage or wood on adobe. This and the various types of foundation are evidence of the rooms having been added on at different times.