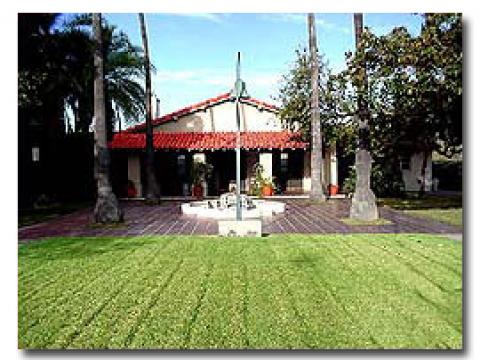 The museum is open to the public the 1st & 3rd Saturday of every month from 12noon to 4pm, or by appointment only.

It is said that great cities have history around every corner.  One of Los Angeles’ greatest historical treasures ironically sits beneath a busy intersection and quiet park land, known as the Campo. It is here, through a historical re-creation, you can learn the secrets of the adobe building that historians refer to as the birthplace of California.

Listed as Los Angeles Cultural-Historic Monument No. 29 on November 13, 1964 and California State Historical Landmark No. 151 on January 11, 1935, Campo de Cahuenga Memorial Park is situated on Lankershim Boulevard across from Universal City Studios in North Hollywood.  There you will find historical records from five crucial phases of California history, including the:

The original adobe structure was demolished in 1900; however, in 1923 the City of Los Angeles provided the funds to purchase the property. Decades later, efforts led by Irene T. Lindsay, the then President of the San Fernando Valley Historical Society, resulted in the City building a Mission Revival and Spanish Colonial Revival style replica "adobe" ranch house which was dedicated on November 2, 1950. It is now a park and interpretive center managed by the City of Los Angeles's Department of Recreation and Parks in collaboration with the Campo de Cahuenga Historical Memorial Association.

The foundations of the original adobe were unearthed beneath Lankershim Boulevard during construction of the Metro Red Line Subway. The parts of the foundation within the park are preserved as an exhibit, and the “footprint” of the foundations under the street and sidewalk are marked by decorative pavement.

Campo de Cahuenga is the site of the signing of the Treaty of Cahuenga in January 1847.  This document was instrumental in ending the conflict over the southwest territory between the United States and Mexico.  Each year in January, the Campo de Cahuenga Historical Memorial Association holds a re-enactment of this historic event; a definite must see!

The museum has a collection of artifacts, as well as, the January 13, 1847 Treaty of Cahuenga.
Current showcase includes artifacts of John C. Freemont and Andres Pico.
Community Room/Exhibit Hall, with room capacity of 75, and the outdoor space and gardens are available for permit rentals upon request.
To make a private tour appointment, or to obtain a permit for the use of facility, call the Museum Manager at (818) 623-4166.