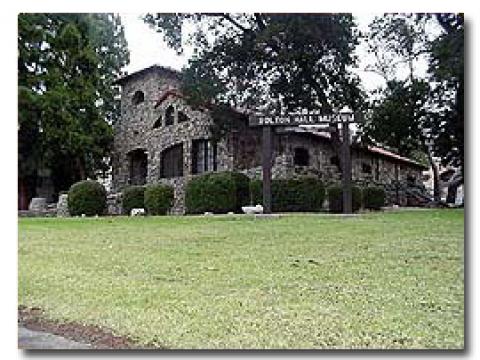 Research Library Open by Appointment Only


History: For over twenty years the heavy wooden doors of Bolton Hall in Tujunga were tightly secured. The solid stone building, once the heart of a fledgling community, came to life once more in 1980, and a cherished dream was realized by the Little Landers Historical Society. Soon after the turn of the century Glorietta Heights (located on part of the Mexican land grant of Rancho Tujunga) came to the attention of Marshall Hartranft, a land developer who engaged William E. Smythe, and editor who recognized the miracle of irrigation to publicize the upper slopes of the chaparral-covered pass. Believing that families settling on an acre or two of land could support themselves and prosper, Smythe founded a movement known as "Little Lands" and had already established colonies in san Ysidro, Hayworth Heath and Cupertino.

In 1913 settlers moved onto acre and half acre lots, calling themselves Little Landers. In April of that year Hartranft donated five lots, contracted for and financed construction of a meeting house. Using rocks gathered from local hillsides and Tujunga Wash, George Harris, "Nature Builder," designed the edifice to harmonize with its setting between the Verdugo Hills and San Gabriel Mountains. Slightly arched windows hint of Spanish influence while inside a great fireplace resembles a natural precipice under which Indians might have built their fires.

The Clubhouse, as it was first known, was dedicated in August of 1913 and immediately became the hub for all community activities - town meetings, church services, socials and dances. The first public library in the San Fernando Valley was in Burbank; the second in newly opened Bolton Hall; the third in Sunland six months later. One might reasonably assume the name "Bolton Hall" was chosen to honor some local hero named Bolton. However, Smythe managed to honor his friend the author Bolton Hall (whose writings concerning land development had inspired to Smythe) and to perpetuate a harmless pun. A variety of factors contributed to the demise of the Little Landers movement - an economic recession, World War I and a growing cynicism about the "ideal life" which failed to bring financial gains. By 1920 the idea of the colony had waned.

Bolton Hall, however, continued to serve the community. Following the war the American Legion purchased it. Encouraged by a steady influx of new residents, town leaders sought and gained incorporation for Tujunga in 1925. This centrally located building made an ideal City Hall. It was rented for a number of years and eventually purchased for $15000. All city business was transacted herein, and with the acquisition from Glendale of two iron cells for the nominal sum of $1.00, one of the added rooms became the town jail. Following the annexation to Los Angeles in 1932 Bolton Hall housed Los Angeles' Department of Building and Safety as well as its Health Department.

The city eventually built a new municipal building on Foothill Boulevard and the old stone structure was boarded up in 1957. The bell was moved from the tower where it had rung out the calls for school, church and disasters. It was to hang in the Travel Towns Little Red Schoolhouse, then under construction in Griffith Park. While Bolton Hall turned its brooding face on Commerce Avenue for the following twenty years, a struggle began: first, just to save the building and demolition, and later, to see it restored and put to use for the benefit of both Tujunga and Sunland residents. In their growth the two small towns had met and come to consider themselves one community. In 1959 when the Los Angeles Department of Recreation and Parks proposed razing the building, a number of local citizens joined to form the Little Landers Historical Society. The ten-year battle for Bolton Hall had begun.

The Department of Recreation and Parks held a permit to demolish it, but the Little Landers, with the assistance from other civic organizations, gained one extension after another for "further study." Starr Von Fluss, charter member and past president of the Little Landers served as campaign chairman to raise funds for the restoration. Finally in 1967 funds raised by these Little Landers were matched from a federally funded city program, assuring restoration. Roberta Stewart, for many years president of the historical society powered the drive.

While the structure itself was sound, architectural studies of the interior and roof found many changes necessary to bring the hall up to Building and Safety standards. By the time renovation was to start, ten years passed and inflation had taken its toll of original estimates.

Councilman Robert Ronca, apprised of the situation by then president Mel Carlson, petitioned the city for additional funds, which were subsequently granted. Work began in February 1980. The interior of the building was kept as near to the original as possible, while some adjustments have been made to meet prevailing needs. Facilities consist of two offices - one for Little Landers and the other for the Sunland-Tujunga Chamber of Commerce. There is a large combination meeting room and museum, a research library, rest rooms and quarters for a resident caretaker.

The McGroarty home, now the McGroarty Cultural Art Center was designated Historical Monument number 63 in 1970. Not many neighborhoods can boast of two historical monuments, one a museum of its own history. Today's Little Landers, like those of Hartranft and Smythe's day, see Bolton Hall as an integral part of the community - an old beauty reclaimed to serve new generations.